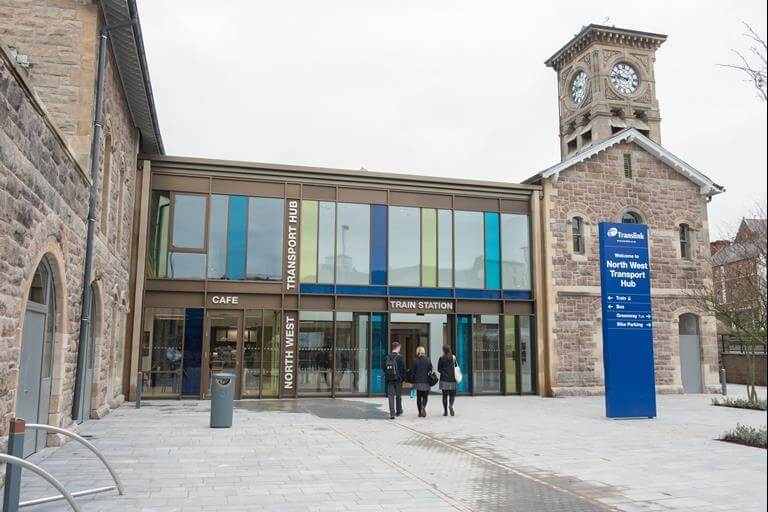 Translink’s new transport hub for the North West opened to passengers on 21st October 2019.  Construction on the £27 million scheme began in 2018, and a second phase of works will be completed in 2020.  The Grade-B listed Victorian building was previously known as Waterside Train Station, and was selected following public consultation.  Waterside served as one of the city’s main stations for a century, but closed in 1980.  It has been completely refurbished, and as a result has been brought back into use for the first time in decades.

Translink chief executive Chris Conway said that the hub “will be a key portal for the North-West region, supporting business, leisure and tourism opportunities”.  In addition he said that the design “protects the iconic Victorian station building and will be a catalyst for development in the wider area.”   Above all, the new hub will create a much needed gateway to the whole North West region.  Moreover, it will encourage people to choose active, sustainable transport modes.

Translink appointed Farrans to complete the construction, in a joint venture with railway engineers, Rhomberg Sersa.  The project included the construction of new platforms, a new 100-space Park & Ride and the demolition of the current train station.  The North-West Transport Hub will allow for improved co-ordination between rail and local and cross-border bus services.  Likewise, it will also act as a Greenway link to the city centre and Foyle Street Bus Centre via the iconic Peace Bridge.

Swisspearl Reflex Panels were selected for the exterior cladding, with installation by Mallon Joinery.  The panels were pre-cut and drilled in the Swisspearl Factory before delivery to the site.